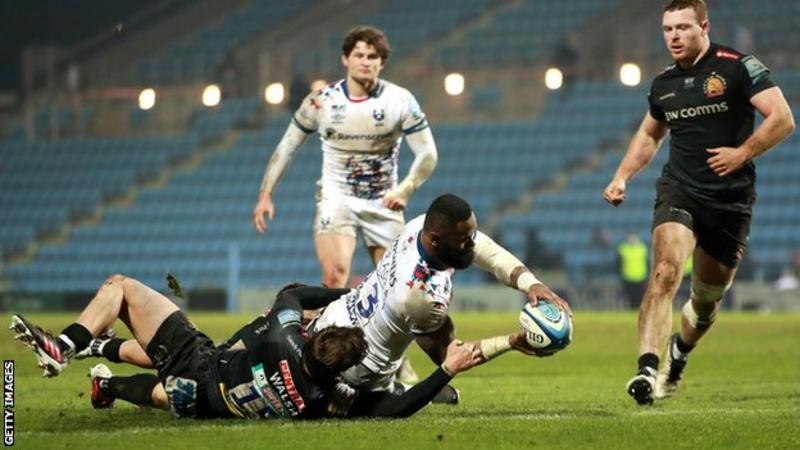 An inspired Bristol beat rivals Exeter in a bruising encounter to go above the Chiefs at the top of the Premiership.

Harry Randall was mauled over as the visitors impressed early on before Jonny Hill went over from close range
to level late in the first half.

Callum Sheedy's penalty put Bristol ahead soon after the restart as the Bears outmuscled the champions.

Semi Radradra got the decisive score 10 minutes from time before a second Sheedy penalty late on.

Victory in the top-of-the-table meeting moved the Bears four points clear after a fifth successive league victory,
while rare back-to-back losses for Exeter sees them drop to third after Newcastle's win over Gloucester.

While last week's defeat at Wasps saw the Chiefs rest a number of their star names, they could have few
complaints on this occasion. Despite recording some positive Covid-19 tests this week, the hosts welcomed back
Hill, Henry Slade, Luke Cowan-Dickie and Jonny Gray from rest periods after international duty.

The first half was dominated by the two sides' defences - first Exeter did well to keep Bristol out as Sam Hidalgo-
Clyne just got to Randall's kick through the defence before Ben Earl could touch down, while at the other end
Bristol prevented the Chiefs' well-oiled attacking machine from clicking into gear when they made it into their 22.

Randall's 13th-minute try came after a period of pressure on the Exeter line, while both sides were reduced to
14 men after half an hour when referee Karl Dickson sin-binned Chiefs' tighthead Harry Williams and Bristol
loosehead Jake Woolmore after repeated failed scrums.

The Bears could have had Ratu Naulago join Woolmore in the sin-bin when he deliberately knocked on an
Exeter pass, but the Chiefs took advantage by seizing possession and the flowing passing move that followed
set up their equalising try for Hill.

Sheedy's penalty put Bristol ahead soon after the restart while Exeter had concerns over captain Joe
Simmonds as the fly-half had his ankle strapped up following some lengthy on-field treatment having got
tangled up under some Bristol forwards.